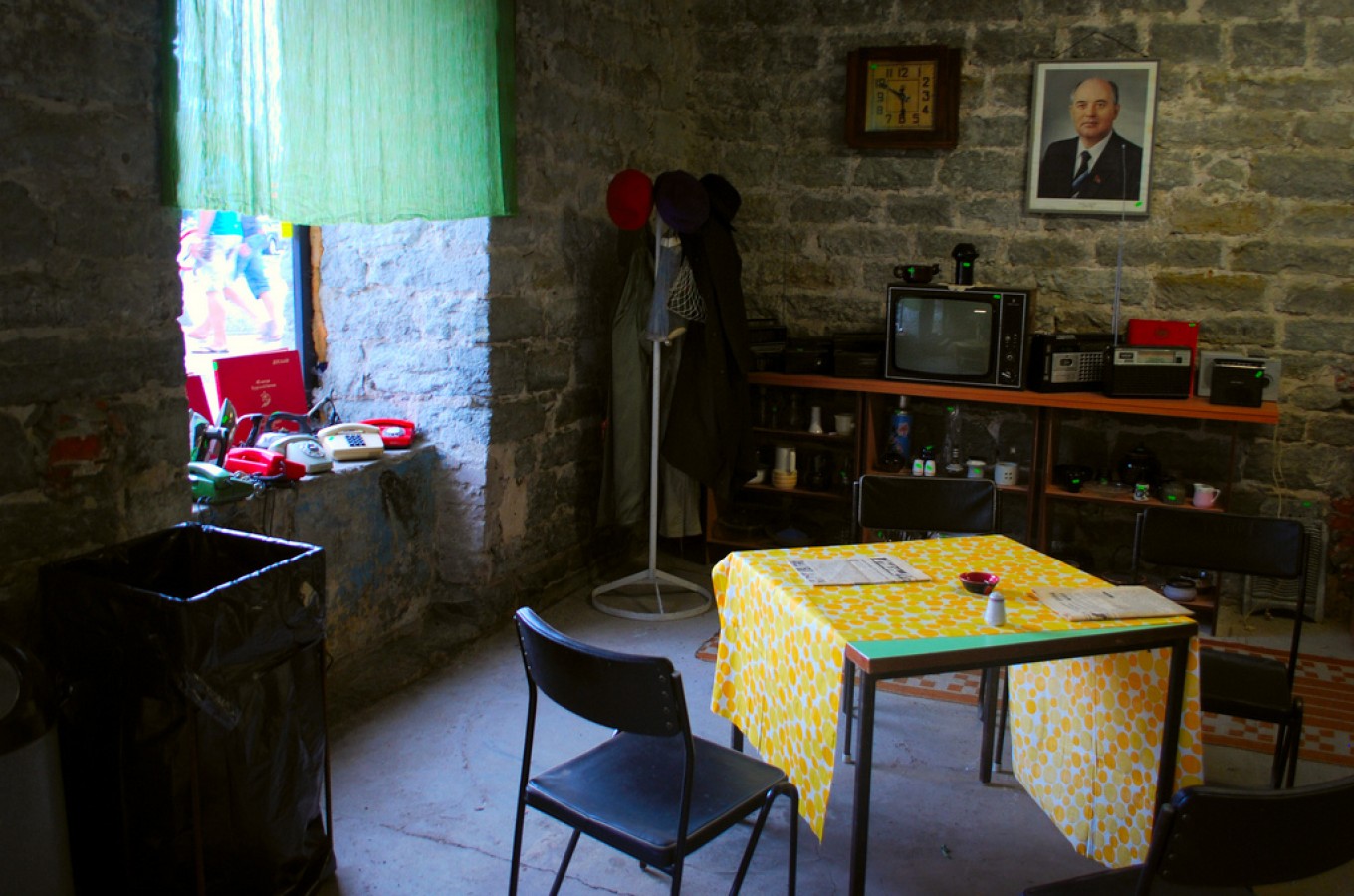 A look back to communism can be a difficult, funny or and a thoughtful one. The Soviet occupation of Estonia lasted from 1940-1941 and 1944-1991, during almost half a century, each of the leaders of the Soviet Union left their marks around. Some of these hide themselves in architecture, others can be found in local anecdotes or stories.

This list of what hints from the past you can find spread out around Tallinn shows you some interesting ways different leaders and different times in the Soviet Union influenced Tallinn.

The creator and first leader of never-before seen communism has of course been immortalized a lot in different and sometimes surprising shapes, sizes and materials  (yes, I also googled paper mache Lenin).

Lenin, long gone before the Estonia got to be a part of Soviet Union,  still had everlasting presence here. Statues are the obvious chance to see this man – busts of Lenin can be found at the Museum of Occupations. But for the ones to whom a head isn’t enough, the other option is climbing the hill next to the Maarjamäe War Memorial – something that started out as a memorial for Soviet soldiers during the first Soviet occupation, got  turned into the last resting place for German soldiers during the Nazi German occupation in 1941-44, and later ironically once again made into a memorial for Soviet soldiers during 1960-70s. Next to Maarjamäe memorial, you can find the backyard of the History Museum which has a graveyard of old Soviet monuments too big to fit in the Occupations Museum. There, besides other Lenins and proletariat, sickles and hammers, the only statue still standing is a giant four meter Lenin gracefully looking at the piles of forgotten Soviet monuments that were, at one point, vandalized and broken and are now just sadly lying on the ground.

Lenin can also be found at the train station market so often mentioned in this blog at every possible occasion, because it’s one of the most memorable (read: crazy) places of the city. Look for red badges. A baby Lenin was on the little badge given to October children – the first step of Pioneer Youth Organization, an adult Lenin could be found on the older Pioneers’ badges.

Lenin, in general, seemed like an important fellow for the Soviet Union.

World War II left a lot of Tallinn with empty lots – mainly because of the fact that one third of Tallinn got destroyed during very destructive bombings. This left a lot of room for Stalinist architecture. The most prominent example is something the locals call the Stalin house (very original, yes) at the start of the Tartu maantee just opposite of Stockmann. The whole of the Tartu maantee street was reconstructed during the 50s. The first plans actually wanted to also tear down the old town, a merchant town is of course an unneeded relic of the past capitalism and injustice, and build all of the city center in the monumental Stalinist style. Luckily, the Soviet Union also ran out of money during the same time, so the plans were stopped. The Stalin house  has a nice little star on top scary for some, nostalgic for others.

Most of the monumental Stalinist architecture can mainly be found in the city center and Põhja-Tallinn region.

After Stalin passed away in 1953, Khrushchev took to power and was in charge from 1953-64. By the time it was clear all the resources had been spent, so building monumental glorious things ended and gave way to the new cheap assemble-your- own-dodgy-concrete-apartment-building way of creating housing.

Khrushchev also managed to leave the zeitgeist in Estonia and it is still standing. The aforementioned is a special style of house referred to as Khrushchyovka built during the time of its namesake, Nikita Khrushchev. This beautiful building can have two to five floors and one quarter of all the people in the Soviet Union got the chance to live in one.

Nowadays, there are still plenty of these left with bits and pieces breaking and falling short of the quality standards of.. well.. anything.

Khrushchyovkas are fun. When an Estonian visits a Soviet time apartment for the first time, they always count the amount of floors while walking towards the building to mentally prepare themselves. Most houses have up to five floors which was considered the maximum to not put in an elevator that would be costly. The apartments also have incredibly tiny kitchens, because they were considered to be a temporary housing before reaching Communism where people didn’t need kitchens – they’d all be eating out in restaurants because everyone could afford it. That never happened, and quite a lot of post-soviet places still rely on the Khrushcyovkas built in the 60s, some with planned 25-year lifetimes. Once you’ve been to one, you’ve been to all, they’re all the same.

You can find these.. um.. everywhere outside of the city center and the old town, pretty much. Find Telliskivi just next to the old town to see what can be done with rundown Soviet apartment buildings and factories.

Brezhnev followed Khrushchev and stayed the First Secretary from 1964 to 1982. Besides the usual communism during Cold War times thing such as setting up a personality cult and being angry at capitalism and quality, Brezhnev also got to host the Olympics.

In 1980, Moscow was all ready to host the biggest event only happening once every four years. But Moscow is unsuitable for sailing, so the regatta needed to be held someplace else. After a long consideration of Riga, Tallinn and St. Petersburg, Tallinn got to host the sailing. This meant heavy rebuilding, reconstructing and general spending more that you should as it is common with Olympics. The general idea of the games were to show off to the Western world and pretend that the myths of the Soviet economy collapsing aren’t true.

Brezhnev and the Olympics gave us the restoration of the old town as well as some lovely and fancy architectural wonders, among them the “Town Hall building“, once baring an awkwardly long name of Vladimir Ilyich Lenin named Culture and Sports Palace. It has however, never been a palace nor a town hall. The locals called it the town hall simply because of the numerous Communist Party plenaries held here. The Town Hall building still stands near the sea, at the moment being sad and waiting for investors to do something to this awkward pyramid-shaped construction.

Besides all of this, you can also still find huge amounts of badges, buttons and other Olympic-memorabilia, because most of the Western world to whom these goods were geared at never showed up. The Soviets invaded Afghanistan in 1979 and as a protest, most countries boycotted the Olympics. Even though 81 countries went to Moscow, only 23 came to Tallinn, because a lot of them were “double-boycotting” standing against having Olympics in an occupied country.

To find the Olympic souvenirs, go to the already-mentioned train station flea market.

You must try to find Vigri, the regatta mascot, looking at you with its beautiful seal eyes, in-between the broken irons and “HET!” propaganda posters.

He did such a great job accidentally collapsing the country he was given a Nobel prize for it.

The most famous attempts of reforming the Soviet Union are perestroika (restructuring) and glasnost (transparency). These two reforms together aiming towards democratization and market reform managed to undermine the Soviet Union so much the country got dissolved.

Gorbachev’s economic policies are also the reason why a lot of young people still remember being sent to stand in huge lines in stores not holding money but food cards to exchange them to meat, sugar or other basic food supplies.

So what did Gorbachev leave behind? Well, Estonia as a country, to be honest. He wasn’t really that into the idea of Estonia along with the other Baltic countries becoming independent, but he was too indecisive during the Singing Revolution – a time of non-violent protests in the end of 1980s that eventually lead Estonia to independence.

Even though Estonians love to think they magically sung the Soviet soldiers away, the protests were just luckily coinciding with Gorbachev losing power among both old-school communists as well as new innovators by trying to be liked by everyone. In the spirit of perestroika and glasnost  locals in Tallinn staged many non-violent protests. In 1988, the protests culminated with 300,000 people singing banned songs and hymns to protest the occupation at the Song Festival Grounds.

1989, a human chain from Tallinn to Vilnius to protest the Molotov-Ribbentrop pact at its 50-year anniversary. The pact was an agreement between Nazi Germany and the Soviet Union before World War II that divided Europe and left all the Baltic countries in the influence of the Soviet Union. With 600 kilometers and roughly 2 million people, the Baltic Way was for a long time the longest human chain ever made.

In 1991, on the 20th of August, Estonia declared independence, lucky for Estonia, Gorbachev was held under house arrest during a coup d’eta in Moscow at the time, so the tanks lining Tallinn’s borders were never actively used because of the confusion in Moscow. The hectic time left Estonia fending for itself for the first time in almost 50-years, starting setting up it’s own independent, free country.

For a concrete overview of the Soviet times in Estonia, visit the Museum of  Occupations. If that gets too serious, then go find the KGB Museum on top of Hotel Viru for a  lighthearted introduction to the KGB’s doings in Tallinn – it’s like a terrible low budget Cold War time Bond movie.

If you’re looking for authentic leftovers of the Soviet times, go and discover the areas of Lasnamäe, Mustamäe or Õismäe. Õismäe is probably the best example, it is the most intricate, amazingly designed Soviet style region of Tallinn. It’s like a maze, a lot of locals still remember getting lost in between the indistinguishable blocks of houses as children. In general, you can still find bits and pieces of decades ago lurking around Tallinn if you just keep your eyes open.

If there is some place you’ve visited and feel like should be mentioned here, leave a comment.