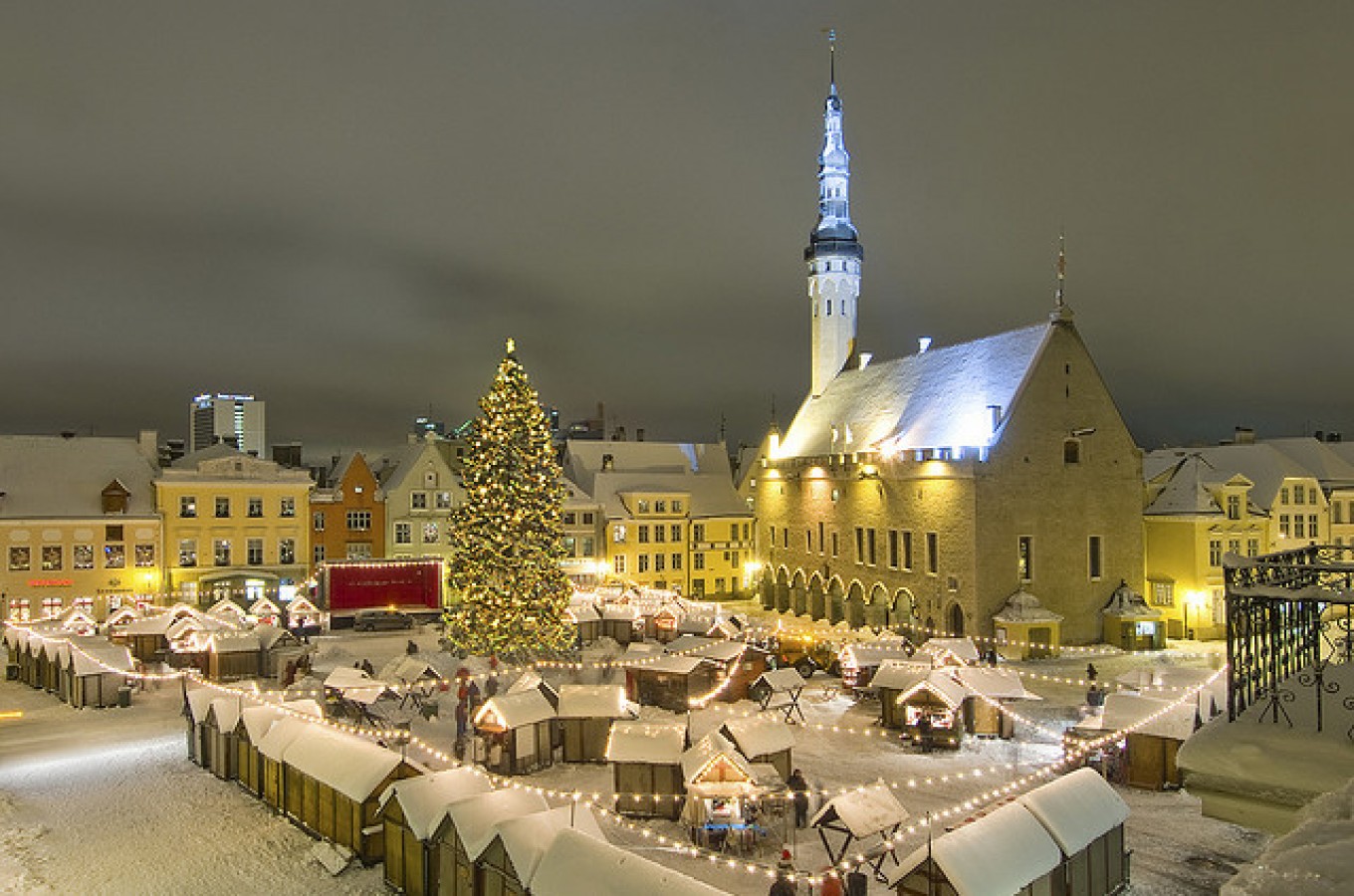 For those able to bear a -10C (or -25C, depends on your luck) weather, Tallinn during winters offers a lot of fun. It doesn’t matter if you’re here for a short time of a few hours, a long week-end or enjoying a full holiday, there’s plenty to do. After you’ve got on your socks, a second pair of socks, really good shoes, many layers of cardigans, several scarves, a warm hat (definitely with ear-flaps, ushankas are the best!) and a coat or two, you’re ready to go and explore!

The idea and explanation of the Christmas Market is simple: according to some historians, Tallinn was the first place in the world to publicly put up a Christmas tree in 1441. And what a better way to celebrate than having a market at the same spot. Its happening annually since 2001.

Tallinn takes immense pride in having the biggest Christmas tree of Estonia, something that turned against their own good in 2011 by falling down… twice.

Around the huge and beautifully decorated Christmas tree, there are 50 or so small houses reminding you of the North Pole and Santa’s village. The little kiosks sell knitted handicrafts and other goods as well as foods and hot drinks. After checking out the overpriced handicrafts and souvenirs and then try to find the reindeer. What helps you along this cold journey is the numerous places selling spiced wine. The walk around the market feels like a fairy tale. There are quite a bit of different things happening at different times from making ice-sculptures to people saying and singing things on a stage.

You can read about the market and their schedules here.

After walking around the Christmas market, you can find the Harju Street just 2 minutes away. There is a huge skating-rink there during winters. What can be better and more wintery than wobbling on two pieces of metal with weird music played in the background. The skating rink usually isn’t really crowded, so you’ll be safe maneuvering across the whole place. The rink is also really beautifully lighted during dark times, so go in the evening, it’s beautiful! There is also a cafe right next to the rink if you feel tired or cold. They’re opened from 10AM to 10PM.

You can read about them here.

The choices of food on an Estonian table have always been closely tied to the time of the year. During winters, the lack of green things forced the Estonian peasants to come up with weird things from mixing miscellaneous grain products to make the odd-tasting „Kama“ to becoming experts in cooking blood in different forms. The table of an old peasant Estonian would during Christmas time have been filled with the festive blood sausages, blood bread, blood-mixed dumplings, blood pancakes and probably anything else with the word blood you can come up with. Christmas was celebrated, even though in the pagan calendar, not thanks to Jesus being born, but thanks to the Sun being located where it is. A Christmas meal doesn’t lack sauerkraut or potatoes as well. You can find traditional Estonian foods either on the Christmas market or in numerous restaurants in the Old Town – try Aed or Vanaema juures for example.

First, find a supermarket. Now look around in the isles and after laughing at the weird names of everything, find something called a „Kelk“ – a sledge.

And for the ones looking for a Soviet feel, get the „Salvo Kelk“ – yes, the saddest, dullest looking one, but we call it „simple“.

Salvo’s are actually the best, because you can feel extreme due to the lack of breaks or steering wheels, it’s all in your own hands! For the really low-budget ones, find the weird small slider that costs 1-2 euros, you’ll definitely recognize this in the store. Now, get yourself a thermos full of tea and a map with the Song Festival Grounds (Lauluväljak) on it!

After reaching your destination, it’s pretty simple: climb up the hill – get down on your sledge, repeat. For the brave, locals have probably already built a few ramps and obstacles as well. Various ways getting down the hill include sitting, standing, backwards, blindfolded, with all your group on one sledge, in a race or making a train of sledges. Use your imagination. A pair of extra cloves will come as handy as the tea you brought along. Occasionally you can also rent equipment right on the spot. Immense fun, good luck!

Little passages in the Old Town

After everything you’ve managed to do with just one day, have a short little walk around the Old Town. It’s mostly quite empty during evenings, and this makes it amazingly beautiful. With a bit of snow glistening here and there, you can hear church bells ringing in the background (or drunk people, depends on chosen streets). Take a glimpse of the locals’ favourite Katariina käik or take the nontouristy route along the Laboratiooriumi street, climb up the amazingly wonderful (and supposedly amazingly haunted) Short Leg street to take a look of the whole city from the Kohtu viewpoint.

After stepping inside a place with more degrees than zero, you’ll finally be able to feel your toes again. And they will notify of their presence in very uncomfortable ways. With winters cold as this, after an Estonian has finished their daily activities, a sauna seems like the only thing capable of restoring normality to their metabolism. Finding a sauna is pretty easy, they exist in most spas and hotels and there are a few public ones still left, just ask receptions, they’ll help you out.

So grab your towel and get ready to sit in a really hot and small space for half an hour at a time. Remove all jewelry and make sure you have a list of appropriate topics to discuss with fellow sauna-goers. Here’s some examples:

Also, you might see some locals hitting themselves with dried up little branches at some point of this activity. This is totally normal, do not interrupt. The explanation lies in making the blood circle better. Apparently, it’s actually considered healthy. After you’ve heated yourself up nicely, enjoy a local beer and end your day with being grateful for indoors. 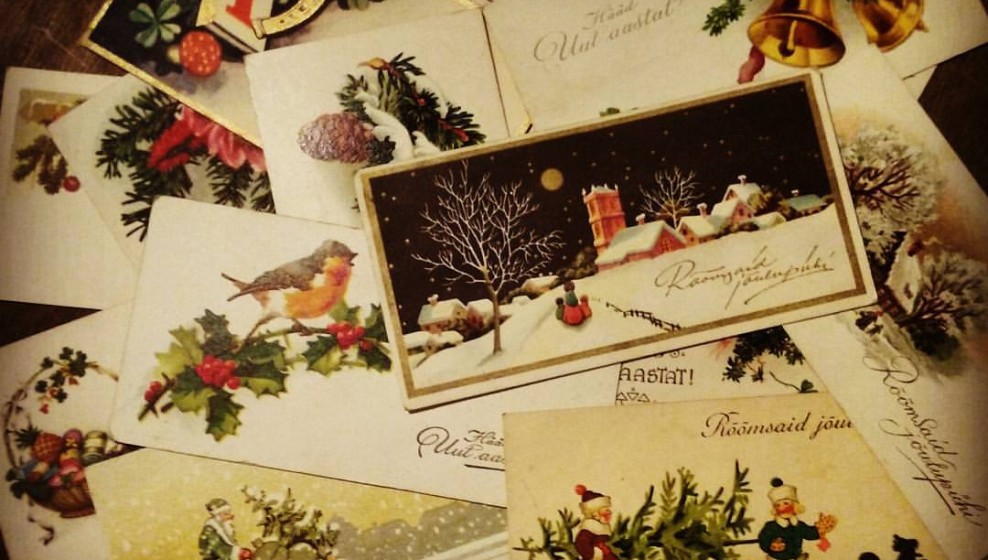 It’s that time of the year – everything is covered in lights, cheery music is... Read more 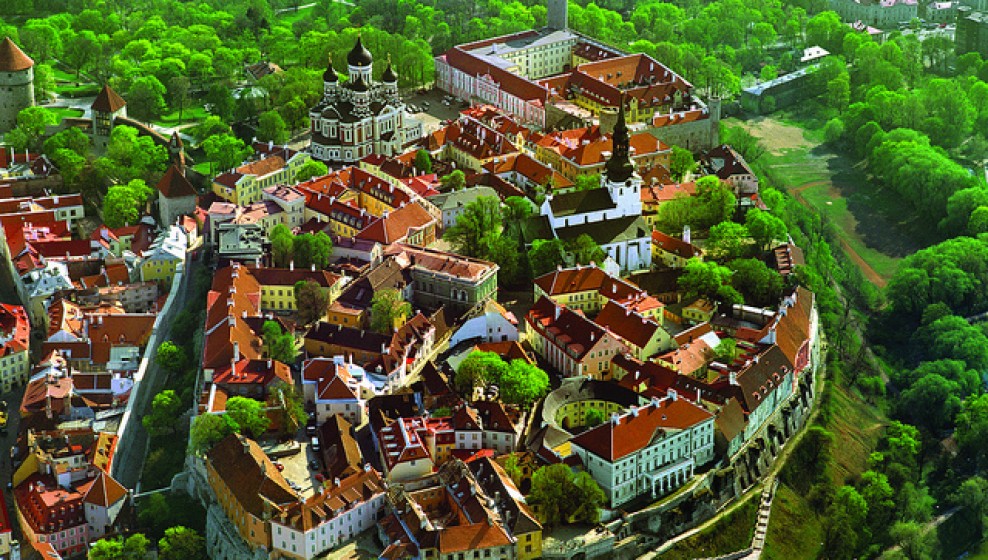 Estonia – the little country on top of Latvia and under Finland – is quite... Read more