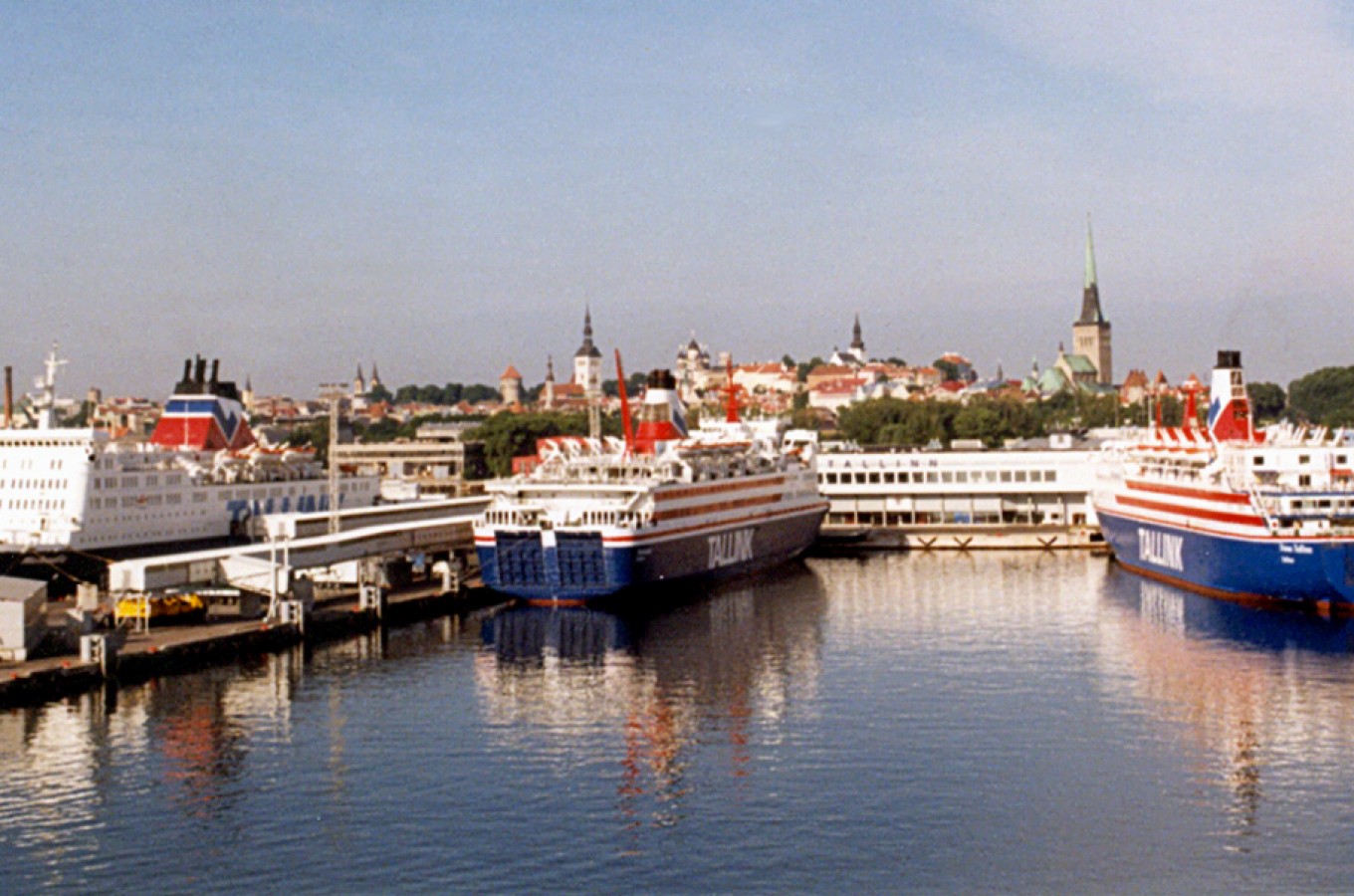 Almost daily, Tallinn is visited by thousands of people coming here with a cruise. If you are on a cruise you only have about six hours all together in the capital of Estonia. This post is aimed at all of you who have a short time in Tallinn due to the cruise organizers thinking St. Petersburg and Helsinki are more important.

Six hours is way too short time for Tallinn, especially since half of the time will be trying to find your way through mazes of tourists. This means taking the most of it here needs a good schedule. Finding the right things to see, do, taste and experience can be easy, if you know what you want to focus on. Tallinn is a brilliant mix of modern, Soviet and medieval wonders, and the good thing is, they are all close together and bundled up.

1. Walk from the cruise port to Rotermann Quarter

Don’t take the shuttle, it gets you nowhere. Well, it takes you directly to the city center. But the port is about fifteen minutes from the center itself, too, so it would be reasonable to start your adventure without a delay and sitting on a bus with a broken air conditioner.

Promenade through the port area towards the city center with the modern skyscrapers. At the start of the journey in the port area, you’ll see a weird activity going on. Finnish people seem to be having a competition who is able to carry the most light alcohol in the most innovative way (from modest wheelie-bags to shopping carts, carriages etc. We are planning on opening up a camel rental soon). Finland has an unofficial half-dry law: alcohol there is just very expensive there. Thus this small little industry is bustling here. Currently, alcohol in Estonia is half the price of Finland, so even though a lot of tourists are from the north, they usually tend to think Tallinn ends with the port area. You will not see in Estonia after a few years when our economy has reached the levels of Scandinavia – and don’t you tell me this will never happen, it will, some day!

After the port, inbetween the city center and the old town, you’ll find the Rotermann Quarter. About fifteen years ago you’d be looking at a dilapidated abandoned factory area. But now, city planners are making it all change. The quarter has been turned into a lively mix of 19th century architecture with a modern twist. If you happen to be a fan of weird modern buildings, this is the place for you.

Rotermann quarter has shops, restaurants, offices and during summers markets and events happening every now and then. Find the Kalev shop and get yourself a delicious treat for the rest of the day – buy white chocolate with blueberries! It’s amazing!

If you must, then take the shuttle to Mere Puiestee and cross the street, head a bit left of the modern city center to find the Rotermann Quarter or go straight to the old town.

As you enter the old town, you will be greeted by beautiful medieval gates, a McDonald’s and hoards of tourists. You’re on Viru street. This is the main street leading to the Town Hall square, but it is also the most crowded and annoying street.

To avoid filling your bag up with leaflets of Italian Restaurants and Indian Massages, turn right shortly after the gates and head to Müürivahe street.

On Müürivahe street where you will see the “famous” Sweater Wall. I say “famous”, because locals don’t really care about it…  at all. Mostly we don’t even know it exists. Woolen clothes are a rather Estonian thing, but unless  you’re a handicrafts specialist, it will be difficult to assess whether they are man made or produced in a factory. Continue to the first street on your left – St. Catherine’s passage, or Katariina käik in Estonian. This is a beautiful tiny street with.. err.. medieval artifacts on the walls. On the street you’ll feel like you’ve traveled back in time about 500 years. Once you hop into any gallery, you will see handicrafts-men producing art right at the spot. Hunt for the smaller streets in the old town and you’ll love it!

Another beautiful street is the Short Leg street, Lühike jalg in Estonian. This will take you closer to the upper part of the old town. The street ends with the Danish King’s garden –the supposed birthplace of the Danish flag. The Danish king’s garden also gives you the option to climb on the town wall and pretend to be a medieval watchman of the city.

You can also take Tallinn Free Tour to cover the most important sights of the old town with two hours of funny stories presented by lively local students.

The St. Olaf’s church was supposedly the highest building in the world in the 16th century. I say supposedly, because this fact has never really been exactly proven, we have just written about this in tons of guidebooks about Tallinn. During the Soviet times, the KGB moved in and fitted the church into the latest fashion – because of its height, the St. Olaf’s church was the perfect place for surveillance equipment. Nowadays, there is a fantastic viewpoint there with one of the best views of the city.

The hundreds of stairs are scary and steep but you’ll realize they were worth the trouble in the end.

Go find the Kohtu and Patkuli viewing platforms in the upper part of the old town for some excellent cityscapes. These two however might be crowded with five massive fifty-people-per-tour cruise ship tours – the ones you have decided to skip, luckily.

4. Have a traditional Estonian lunch and beer

After all that walking and climbing stairs, it is time for a rewarding lunch with a cold beer. Estonian cuisine in general is either boring or only national food because it is too weird to become international. Therefore I would just recommend keeping out of the town hall square and trying to find places Estonians visit themselves as well. Estonian foods are simple – potatoes, meat, sauerkraut and sausages. It is mainly simple peasant food with a German twist. Most waiters in restaurants will happily tell you which menu-items are considered local and a part of everyday cuisine, too.

Estonia has two beer monopolies – Saku and A le Coq, the country has been divided into two sides for almost a century. On one side, the A le Coq lovers, who happen to be right and know what is a good beer, and the Saku lovers, who either haven’t tasted the far superior A le Coq or need to get their taste buds checked. I joke, of course, because mainstream beer companies need to cater to a huge group of people and with a profit, so they don’t differ that much and they don’t really have an exciting, rememberable taste. Try and find a Puls beer – which are a bit rarer in restaurants, but they are good. Also, there are places that specifically focus on weird beers and quite a lot of Medieval restaurants offer honey beer, too, which is delicious.

There are quite a few places in the old town that locals actually frequent. Hell Hunt for example has delicious lunch offers and is frequented by locals and tourists alike – delicious pastas!

Põrgu is mainly a pub, but besides the weird homemade beers you cannot find anywhere else, they also serve really good steaks.

Aed is excellent for vegetarians and people looking for foods without allergens. They serve healthy Estonian foods with a modern twist.

Another option is finding a neighborhood cafe just outside of the old town. Sesoon is a wonderful restaurant in the Kalamaja area. It gets filled with office-workers every lunch and with local fixie-bike-riding-hipsters in the evenings.

The F-Hoone built in an old factory building also seems to attract same groups of people as Sesoon and is only a 10-minute walk from the touristy old town.

After a nourishing lunch-break, head out of the old town and find the train station flea market. The place is known by locals for the cheapest strawberries in town and to local grandmas the different fresh vegetables as well as clothes. Trust me, you’ll see a lot of old people. And they’ll be buying all sorts of weird things. The market is like the Diagon Alley of Tallinn. And with the Diagon Alley, there is the Knockturn Alley in the back. The Knockturn Alley of the train station market is a meeting place for all sorts of unusual people of all sorts of life. Here you can find people selling all sorts of random pointlessness. Seriously.. Old rusty tools are one example. Pictures of Stalin are a second one. You can find anything there if you know where to look for it.

The train station market also has tons of Soviet memorabilia and we don’t know what to do with them, so we just sell ‘em to tourists.

Haggling is very uncommon in Estonia, so trying to get something with a discount will probably be answered with a simple unfazed “Nyet” by the cashier-lady.

If you don’t feel like discovering the Soviet aspects of Tallinn, look at this little guide to souvenirs.

6. Find modern arts on your way back to the port

Tallinn’s old town is the home to many great galleries, museums and little artisans’ studios. These little wonders can be found anywhere and they are filled with normal arts and then weird modern arts. Really.. really weird. Finding small galleries in the old town is easy. They are around every single corner. But the weirdest modern art is just outside of the old town.

The weirdest art can probably be found at EKKM, or CAME in English – Estonian Museum of Contemporary Art. The museum is just on the shore next to the Linnahall building which is a short walk from the cruise port. The CAME museum was actually just an abandoned power plant that was squatted by local artists and only just now has gained actual lawful rights to be here. They fixed the power plant up good enough to say they tried. The museum is only opened during summers because it doesn’t have heating, which is ironic, since it used to be a power plant.

If you don’t happen to be a big fan of modern arts, go browse a cool museum. The Tallinn Bastion Passages tour under the Kiek in de Kök tower takes you about an hour and it is fascinating – most places in the world don’t let you walk around in medieval tunnels. Booking in a advance is needed. For the KGB fans, climb on top of Hotel Viru for a good view and weird spying equipment in a KGB museum – once again, book in advance!

I made a google map of the points, too. Use it wisely. Also, if you get lost at any point, stop by Tallinn Traveller Info.

Head back to the port and wave good-bye

Now that you’ve seen the capital of Estonia in all its contrasts, you’ll hopefully head home with good feelings about Tallinn and will feel jealous of anyone who visits the place. That is what we’re aiming for at least.

How often do you travel to a new place and feel that there are too... Read more