Whilst America is in the grips of an unprecedented freeze, Estonia has so far enjoyed the warmest winter since the last ice age. But if history is anything to go by, all this will come to a dramatic end sooner rather than later. Here’s some clues on what to do in Estonia once the inevitable happens.

For Estonians, winter is a tough season – it’s dark and cold. Our days are spent shovelling and clearing snow, fighting an unwinnable battle against the white menace from the heavens. We do not smile, and show love only if we must (mostly during Christmas). But winter also gives back. If you find yourself in Tallinn between December and March, getting out of the city offers rewarding experiences.

Presented below are abstracts from the diary of an embattled (and mostly fictional) Estonian, as he (or she – honestly, it’s not me) tries to find a glimmer of light in this season of death. The entries reveal how this unknown hero (again, not necessarily me) learned to love the softer side of the winter.

I have not seen the sun for a month – I fear it has abandoned us. But it has started snowing, which brings some relief. I feel the snow is my only friend. I have my family, but I’m not invited to join them until Christmas Eve. Till this fleeting moment of human contact, I must make do with my new flurry friend.

Snow is nice. It’s soft and not deep enough yet, so I’m able to move around relatively unhindered. Everything looks different, especially in the countryside. The trees and the earth are covered under a white blanket. The houses are too, with only the occasional lit window offering promise of warmth. The bears are hibernating, so that’s one less thing out there trying to kill me.

P.S. I tried rolling around in the snow. Definitely rewarding, will attempt this again.

It is still dark, but as the winter solstice has passed, every day brings a couple of extra minutes of daylight. More snow has appeared, and the dropping temperatures have forced me into wearing a less than flattering fur hat. Luckily there is no one to witness this in the countryside, as surviving Estonians have gathered in the cities. I hear there’s hope in the cities – and interaction. Out in the countryside, there is no-one. Most birds have left for warmer places. Easy for them, as they need not pay an airfare. The birds that have stayed are suspiciously quiet. Perhaps they are ostracising me? Perhaps I am going mad?

I find solace in walking around the deserted forests and beaches. The great empty whiteness is comforting. I must admit, moving amid this loneliness has a certain appeal. I imagine this is how our ancestors lived (if they had air-conditioned cars, access to hot chocolate and if they only worked 40-hour weeks).

P.S. I thought I saw another car today, but the headlights turned out to be a lynx’s eyes. At least it wasn’t a moose. Moose must be feared.

It is now properly cold. I have learned to cope with this by layering clothes. While this is as comfortable as wearing a space suit on a water mattress, I am surprisingly warm. Furthermore, this configuration of clothes allows me to continue exploring the desolate countryside in relative comfort. The bears are still asleep, so there is no objective need for me to be able to react quickly to threats (except for the moose).

While I sometimes still yearn for human contact, I have come to embrace the wilderness. Estonia is incredibly sparsely populated, with 1.29 million people scattered around an area bigger than the Netherlands. There aren’t a lot of places in Europe that are this empty. There is Finland, of course, but it is expensive.

To my great joy, the previously unpretentious waterfalls have frozen solid! They look like strange sculptures, appearing to move while standing perfectly still. The Jägala waterfall has produced a cave between the rock and the ice, making it an ideal shelter. I managed to chase out the feral children, but I suspect they have returned since. 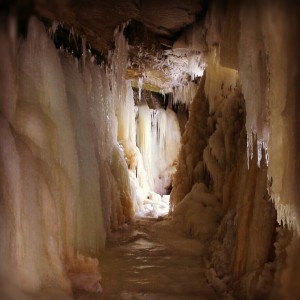 Estonian waterfall or evil villain lair? (Or why not both?)

P.S. Something is happening to the sea – it has grown awfully still, and dark.

It is still cold, but something incredible has happened that has made me forget this. The Baltic Sea has a brackish sort of a water, and as temperatures have dropped, the sea has become frozen. Any sound that was there a month ago, has now stopped. The frozen sea is eerily quiet – there are no waves, no wind and no birds.

I tried driving across the sea (Estonia has the longest ice roads in Europe), and as I did so, I took a few photos. This is helpful in later convincing my friends that I have, in fact, visited Antarctica. Driving on the frozen sea is a strange experience, a curious mix of exuberating, liberating isolation and mortal fear. It’s the result of seeing nothing around you save for open white fields, stretching as far as the eye can see.

The days are now longer still, but there is no end to winter in sight. The other day I saw a small stream thaw and flow, but by the time I got my camera out, it had frozen again. Sneaky, and elusive, is our spring.

They have started closing some of the ice roads. I have started taking long walks on the frozen sea instead. I am amusing myself by pretending to be an engineer looking for oil in the Antarctic (but have so far come up empty handed). With youthful glee, I spend my days under the blue skies, sliding effortlessly across the frozen water. 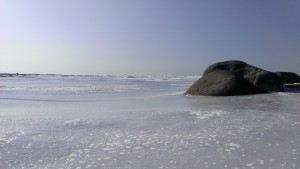 The Baltic Sea A.K.A. the world’s largest ice rink

P.S. Came across the dreaded moose today. It didn’t wish to move so I had to take a detour. I think I wasn’t followed.

Dear not so dear diary,

I was once again tricked into believing spring had arrived, but it turned out to be April fools. Very funny. I am, however, seeing more and more of the sun and the temperatures are now more forgiving. I have chosen to retire my fur hat for this year. More out of spite than anything else, I must admit.

At last, the great floods of the spring are arriving! The snow is on the back foot, quickly retreating as life begins anew. There is an overwhelming sense of hope, as people begin to emerge from their shelters. There is a rumour going around, about the possibility of a decent summer this year. Birds are returning and recovering from casualties sustained during their retreat to the Southlands. On the downside, the bears are now awake.

It is a peculiar season, the spring. The air is thick not just with all these new smells of life, but there’s also relief. And yet, I can’t help but feel a little sad over the winter’s passing. As more and more people move to reclaim the countryside, I must admit to missing the times when you could drive around the coast and the forests and hardly see another soul. There is something inherently primordial and liberating about this feeling of isolation. While Estonia normally has ridiculously extensive internet coverage, the countryside is the one place where Facebook runs just a little slower.

Check out the Traveller Tours daytrips out of Tallinn here. 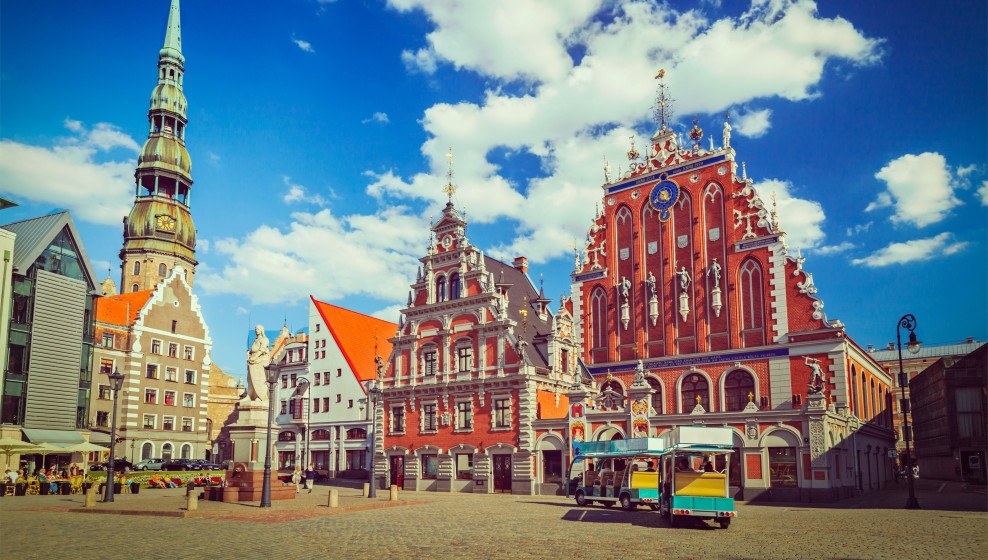 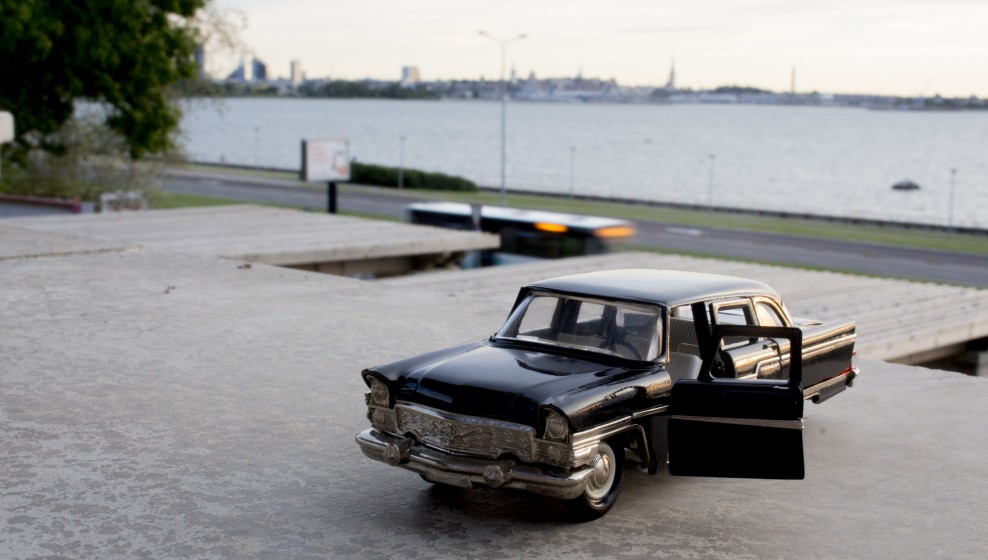